One of my girls asked if I could make her a set of Dungeons & Dragons dice. Not knowing anything about them, I sent her shopping on Thingiverse and she settled on this set designed by JakeVav. I printed it in Hatchbox Wood PLA hybrid so I could make it look antique-y. 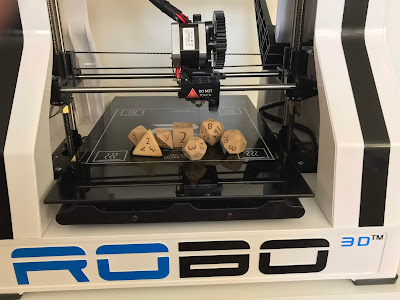 No, I didn't print them all at once, this is a reunion photo. I tried to print them in groups of 2 or 3 to save setup and print time, but I found that as the extruder jumped from one die to another the filament sagged out of the nozzle and left a little "worm" on the next die. Although I experimented with retraction, coast and wipe settings, the wood filament is just more prone to this side effect. So I reprinted the last few as singletons and they came out much cleaner.


After some cleanup I treated them all with wood stain (submerged for several hours) and added a couple very thin coats of Varathane. They came out pretty darn wood-like, especially the triangular one with some color variation that looks like grain. 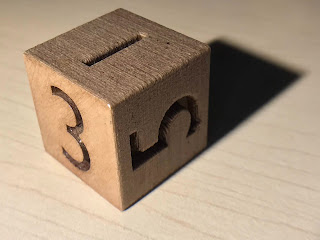 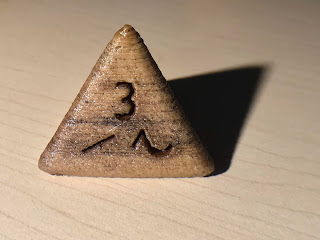 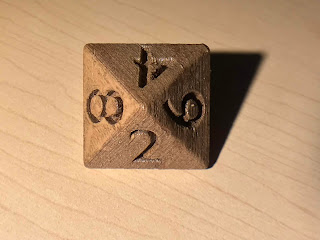 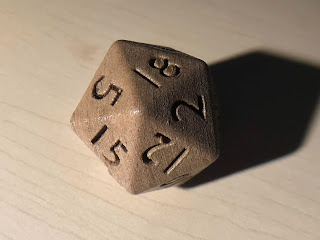 Here's the whole set ready to give away. 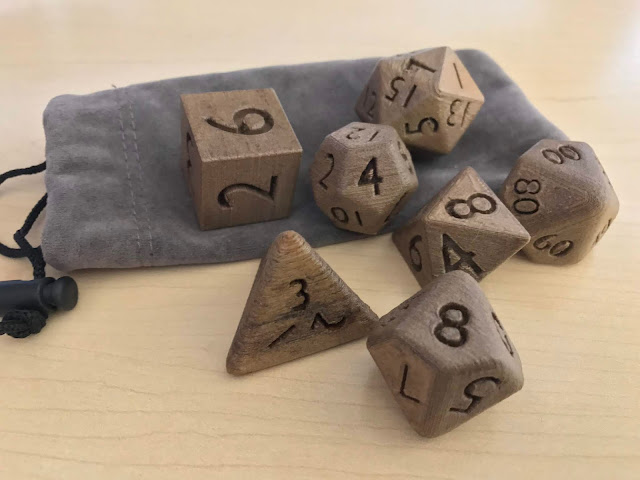 There were a few problems. Lettering can fail to come out clearly if it is too small. And there were a few "slumps" especially in the overhanging faces (I did not use any support structures). 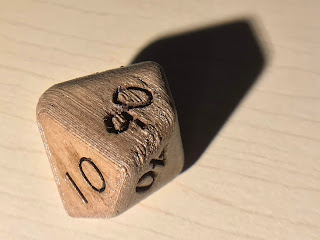 The 10 face was down to the bed, so the 90 was an overhang. You can see the edge between 90 and 40 came out kind of ragged. But in a project like this that is supposed to look ancient and magical and mysterious, I figured a little irregularity gives it character. 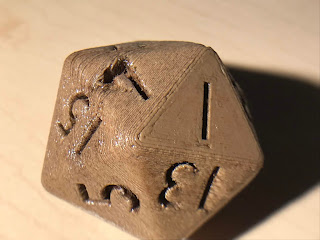 Same here, the 1 was on the bed and so the 7 was an overhang.

In many cases I had to clean the letters out with a very tiny Dremel bit. 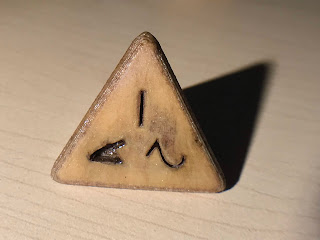 Another issue is that the faces on the bed come out glassy-smooth. I sanded them in a single direction to give them some "grain" for the stain to penetrate. The 10 and the 1 above came out pretty well. I should have sanded his 1-2-4 face more deeply - it came out more smooth and yellow than all the rest.


At first I tried to use some GP3D wood filament I have on hand that is a bit lighter in color. But I could not get it to stick to the bed, even though I was using the wonderful Magigoo coating. I was trying to print one of the smaller dice, and it was just not enough surface area to stick to the glass. I gave up on that pretty quickly and switched to the Hatchbox. This is the second project in which I've given up on the GP3D - see my trophy base project. I don't think I'll try it again.

Evil thought: (only after it was all done)  I've been using Simplify3D software for the last 7 months. One of its features is the ability to print different levels of a model with different settings. I printed this with 20% infill. But it would be very easy to print the lower layers with a much denser infill, which would essentially make them "loaded" dice. The bottom face would be much much heavier, making it slightly more likely to land on the bottom, and making the opposite face more likely to come up. So... if you're playing D&D or any other dice game with 3D-printed dice, watch out!
at June 30, 2018

Don't waste your time and mine by posting phony comments with links to your sites. I detect them and delete them within 24 hours.